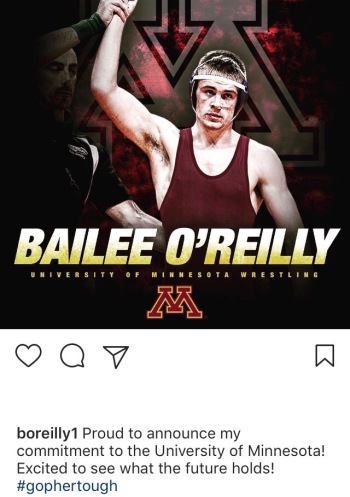 This is Goodhue Wrestling’s first wrestler to compete at the Division I level. Bailee was recruited by multiple schools and divisions. At this point Bailee plans to pursue a business major after finishing high school with a 3.5+ GPA. He also received a $1k academic scholarship from the Minnesota Wrestling Coaches Association (MWCA). On the mat, Bailee was a 6 year varsity starter, a winner of 185 career matches, a 3x state entrant and a 2x State Champ, winning the 152A title in 2016 and the 160A title in 2017.

The decision to compete for the Gophers came down to the traditions of success that Minnesota has had at developing wrestlers. “One thing that always drew me towards the U was the great fan base and all the resources they have in place for the guys who are willing to put in the work to be great and be remembered for years.”

The upcoming season will likely be a red shirt year. Bailee expects to compete at 165 pounds for the Gophers in open tournaments.

Bailee will sign his National Letter of Intent (NLI) on National Signing Day Wednesday, April 12th, at 3:00 in the wrestling room. Fans and friends are welcome to attend.