In his final match of the tournament, Joel Gadient dropped his 5th place match 7-1 against Brendon Coyer of Osakis.

Joel Gadient wrestled in a state consolation semi against Kyle Hennen of Minneota. Joel wrestled hard but lost 5-1. As a result, he will wrestle for 5th place in the 4:30 championship session that will first feature 3rd and 5th place matches. Good luck Joel!

The Quarter Final round at state Friday night once again brought mixed results. Bailee’s opponent lost his quarter match 4-3 which unfortunately bumped Bailee out of the tournament. Joel wrestled a 2x state champ Austin Anderly of LeSueur-Henderson very competitively, frustrating him to the end. Down 5-3 with a minute left, Joel attacked to score but Anderly countered well and Joel ultimately fell 9-4.

Joel’s loss dropped him to the consolation bracket. In the late wrestle back session, Joel put lots of points on the board against his opponent, Hunter Sumner of Mille Lacs. Up 9-2, Joel got into a scramble that led to him sitting in a leg ride. Naturally a leg riding machine, Joel settled into a guillotine, and crisply transitioned into a headlock to get the fall in the third period.

In the consolation quarter final round, Joel needed to win to be a medalist. His opponent was Byron Byer, a senior from Frazee, and a common opponent. Byer defeated Joel in his first state match two years ago. With revenge in mind, Joel emerged victorious with a 3-1 decision. Joel Gadient is going to be on the podium tonight!

Joel wrestles next at approximately 1:00 p.m. in the consolation semifinals. Depending on the outcome, Joel will wrestle for either 3rd or 5th place in the 4:30 3rd/5th place round. Championship finals are slated for a 7:00 start.

The first round of the 2015 State Wrestling Tournament opened up with mixed results for Goodhue wrestlers Joel Gadient and Bailee O’Reilly. Joel, wrestling at 126, fell behind NHREG’s Cordell Peterson early in the first and continued to trail into the third period. Down 7-5 with about 30-40 seconds left, Joel went feet to back for 5 to finish with a 10-7 win to advance into the Quarter Finals. At 5:30, the quarters will start and Joel will face 2x State Champ Austin Anderly.

Bailee O’Reilly, wrestling at 152, wrestled a scoreless first period. Down 1-0 in the third, he gave up two take downs while in on his own shots to fall 5-1. He will need his opponent to win tonight to in the quarters to have a chance to wrestle in consolation tonight.

Congratulations to Bailee O’Reilly on earning his 100th career victory! 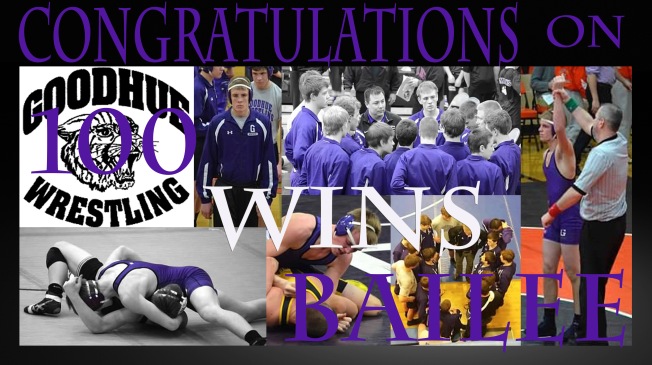 Goodhue’s 152 pounder has reached an impressive wrestling milestone – 100 career match wins. Bailee reached the century mark in the quarter finals of the 2015 Section 1A Tournament in a 4-5 seed match-up with a first round 4-0 decision over his K-W opponent, who he had lost to in the regular season. At the end of the tournament, Bailee had 103 wins and his first State Tournament berth. A family affair, now Bailee sits 8 wins behind his father Zach (111) and 23 wins behind his uncle Ben (126) on Goodhue’s all-time wins list.

Just a sophomore, Bailee has been a full-time Varsity starter since the beginning of 7th grade, when he won numerous one point wrestle-off matches with fellow teammate Joel Gadient. Three years later, Joel himself is closing in on his own 100 wins mark. Congratulations to Bailee and best of luck at the State Tournament!

The Goodhue Wrestling team travels to Rochester this Friday and Saturday for the Section 1 Individual Wrestling Tournament. The seeding meeting will take place Wednesday evening and then brackets will be released. On Friday the team will leave at 8:30 to the Mayo Civic Center in Rochester. The tournament will kick off with any wrestlers competing in a first round match at 12:30 p.m. and then all Quarter Finals matches will begin at 1:30.

On Saturday we will leave at 8:00 to weigh in and prepare for the 11:00 Championship Semi Finals round. Consolation semis will be at 1:30 and 5th place matches at 3:00. The Parade of Champions is expected to begin at approximately 4:00 p.m. and the Finals and 3rd place matches beginning immediately afterward.

We will get a link to brackets posted here on Thursday. Good luck to all the wrestlers as they pursue their goals this weekend! 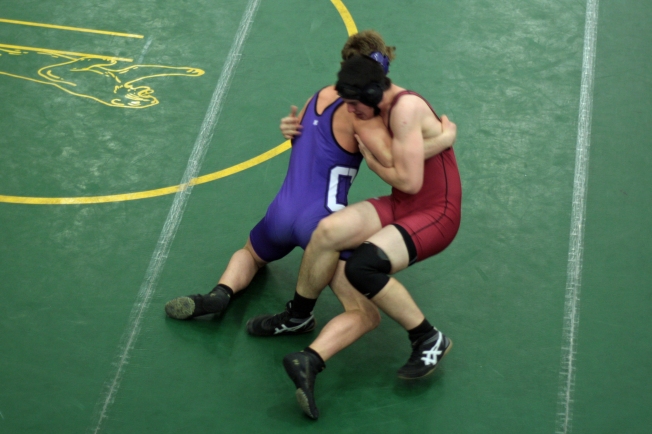 The Goodhue Wrestling Varsity team drew the 5th seed based on their regular season performance this year. The team will travel to #4 seed Chatfield tonight, who are ranked #8 in the state. The bus leaves at 4:30 and the dual will start at 7:00 p.m.